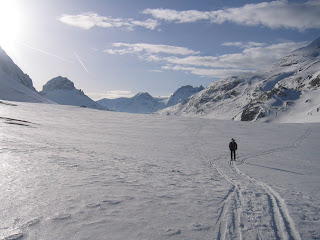 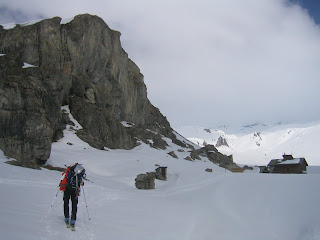 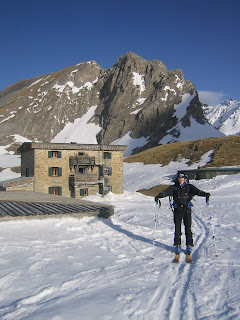 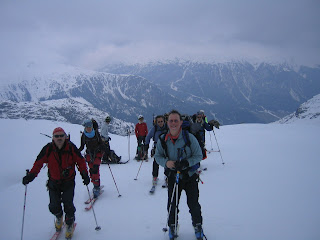 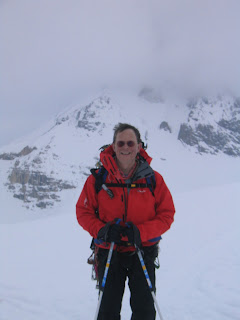 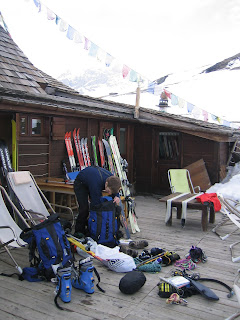 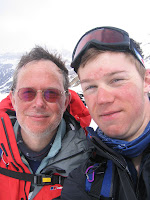 the Vanoise
from Modane to Val D'Isere with a complete novice ski mountaineer might see a bit of a rash project to undertake - especially as said novice was my 18 yr old son. But Duncan had said to me - "Hey Pop, we'd better get this ski traverse thing you do out of the way before I go to Uni. You'll be too old after I graduate 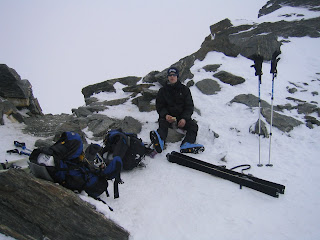 ". Nothing like a challenge.
The plane train taxi in your ski kit was fun - except I'd booked to Moutiers rather than Modane! Duhhh! So had to add an additional leg in the morning of first day by train to Modane and then to the delightful small ski resort of Aussois by Taxi. Strip the bubble wrap/cling film off the skis and then the dude and I planked up to Refuge de La Dent Parrachee. Very busy. Very amusing warden 'Frank' who did a comedy routine after the repas. Highly amusing.
Day 2 skinned up toward the Pointe Labby north west of the Dent Parrachee in very misty conditions, some awkward navigation to the col de Labby (3328m). The head of the Glacier de Mahore was very tricky navigation, but eventually the mist drew back and a route could be seen for a long superb ski out to the splendid Refuge de l'Arpont (2309m).
Day 3 was a big day with fairly poor weather. We were going over the Dome de Chasseforet (3507m) which was the highest point so far. A hard slog up to that point - but once up there fairly easy going, apart from the mist making navigation a bit of a pain. Fortunately it
cleared as we went northwards on the Glacier du Pelve past the Col du Pelve - with perhaps one of the cruxes of the tour coming at the Pointe Oueste du Mont Pelve (3254m). A wierd scalloped snow gully which had to be climbed to get past the Pointe du Dard (3129m) over to the Glacier de la Roche Feran. Crossing the Glacier in the late afternoon sun was wonderful - as there was still another 4km to go to get to the Refuge Col de la Vanoise. Taking care not to head off east down the wrong ski descent we hammered down the long black run east of and underneath the Grand Rocheuse of the Grande Aiguille D'Arcelline arriving in some style (the snow was flattering) at the hut.
Day 4 Terrific Ski du Fond day which started with empty snow slopes and perfect skiing from the Refuge Col de la Vanoise eastward following the GR55 to the Pont de Croe Vie. The last descent down to this was epic. Double black run on sheer ice. Screechh Scraaatch. We then had a long haul around to the Refuge de la Femma following a long gentle rising tour up the Vallon de la Rocheuse under the Pointe du Charbonnier. The hut was fantastic. Terrific patisserie, modern loos showers, and in the evening we watched a family of alpine foxes.
Day 5 we climbed steeply from the hut due north and found our second crux. We were heading north to the Pointe de la Sana (3436m). We perhaps got a little off route and had to take skis off, crampons on and climb for a while. About Scottish Grade I/II but steep nevertheless. We were quite relieved to reach the Col des Barmes de l'Ours. Hellish steep drop off for the last run down, to Val D'isere, but what the heck. We plunged (quite literally) off the crest and into the gully only to find (you guessed) perfect knee deep powder. We whooped and whooped our way down the Glacier des Barme heading for the ravine just north of the Rocher du Mont Roup - well seen from Tignes. Numerous avalanches just North of the small hamlet of Le Manchet and then PISTES. But we still managed to leave ourselves an awkward river crossing.
Brilliant to be met by Dave Howard and Ewan Clark in Val D'Isere. But the dude and I made sure we had a superb steak hache and chips first.
Fine trip
Posted by Bob Reid at 13:53