A sneaked Munro day is often a guilty pleasure. Little planning, a chance good weather forecast and – off you go. 5th February – still no really decent winter conditions, but rumours of more snow over in the west especially around Glen Lyon. Was there enough to ski? Good job I had put my walking boots in the car as well. Still no decent ski touring conditions – but an excellent, snatched, hill day. Meall Buidhe added to the Munro tally. Can’t deny that this represents much of the imperative (and, for that matter, the inspiration) at the moment. 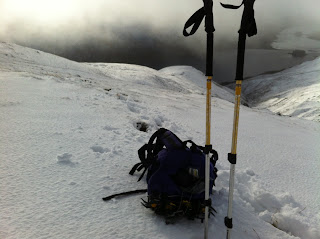 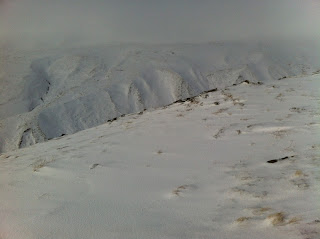 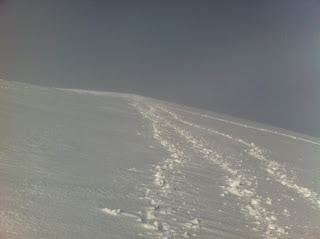 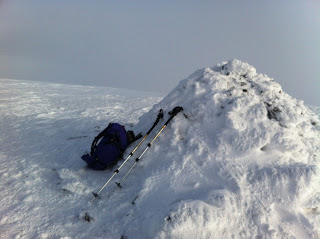 Schiehallion today. Scotland all brown velvet edged with frosty white lace. Felt Maskeleyne's presence.
28 01 2012
A summary in less than 140 characters, perhaps the new Haiku (according to climbing buddy Ian Crofton), of an excellent 3 hours trip up and down Schiehallion. Coming as the second hill walking day of the new year – there seemed to be a surprising spring in the step. More than I had expected having felt sluggish at New Year. 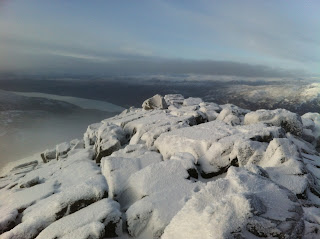 Ian Crofton tells me that my reference to Maskeleyne is explained well in his book History Without Boring Bits where he writes....
Fiddling on the Fairy Hill

In 1774 the Astronomer Royal, the Reverend Dr Nevil Maskelyne, travelled to Scotland on behalf of the Royal Society in order to conduct experiments on the mountain called Schiehallion (whose name means ‘fairy hill of the Caledonians’). The purpose was to ‘weigh the world’ – in other words, to determine the density of the earth. Schiehallion was chosen because of its conical shape and its symmetry, and for four months Maskelyne and his assistants, living in a hut on the slopes of the mountain, conducted experiments involving observations of the deviation of plumb lines, and of stars near their zeniths on the north and south sides of the mountain. From Maskelyne’s observations, Charles Hutton calculated that the density of the earth was 4.5 times that of water (the currently accepted value is 5.515). Although the expedition was a success, Maskelyne appears to have derived little pleasure from the experience:

My going to Scotland was not a matter of choice, but of necessity. The Royal Society … made a point with me to go there to take the direction of the experiment, which I did, not without reluctance, nor from any wish to depart from my own observatory to live on a barren mountain, but purely to serve the Society and the public, for which I received no gratuity, and had only my expenses paid for me.

The Royal Society did not, however, cover the cost of the farewell party, organized by the expedition cook, Duncan Robertson, who laid on whisky and played the fiddle. Such was the exuberance of the occasion that the hut burnt down, and Robertson’s fiddle also fell victim to the flames. In recompense, once he was back in London, Maskelyne sent Robertson a new fiddle – a Stradivarius.

If you want to find out more – you can buy the book at: 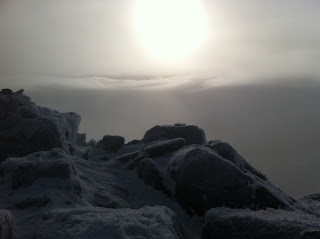 2012 kicked off with a wee excursion to Central Scotland staying at Raeburn Hut. Nothing like the winter of the last two seasons, with sparse snow and slim pickings in terms of winter conditions.
So opted for a Munro and climbed Stuchd an Lochain in Mamlorn. Apart from the very long drive along Glen Lyon and back to Raeburn, this was a good day out on the hill. Very little evidence of winter however. 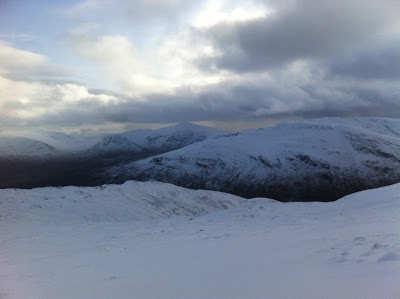 This picture is taken a couple of weeks later looking south from Meall Buidhe.
So following day opted for a high crag -  climbing on Creagan Cha-no on east side of Cairngorm overlooking Strath Nethy. No guide, no topo, all quite exciting though very little snow and certainly not enough to justify claiming a new winter route. 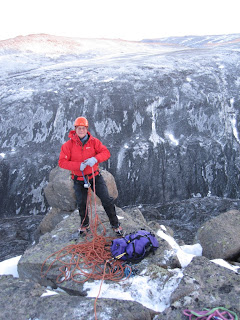 Climbed a ridge like feature at the southern end of the crag, Ian leading, no crampons no axes. Felt quite alpine in all but scale, which of course is microscopic. Had to put crampons on, en route, so-to-speak as the top 20ft was iced. Hardly warrants a grade even – v.diff (escapable) – but at least justified carrying a rope that far. 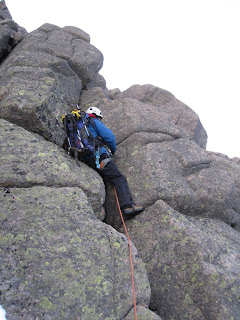 Sunset/evening very early at that time of year so good views and fantastic feeling before dropping back to car, in the gloaming. 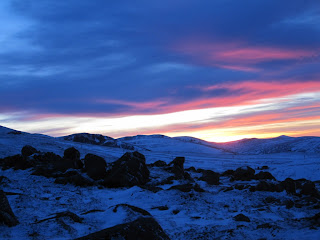