Enjoying the Little Hills - and the big
This snowy 2013 season has meant winter mountaineering activities could be enjoyed at quite low altitudes. I have found suitable conditions to climb or ski up some rather modest Corbetts but the experience has been distinctly wintry.
Easiest, though by far the most spectacular was a stroll up Ben Tirran at 2941ft or 896mtrs - this Corbett, sitting on the watershed between Glen Clova and Glen Esk, is a fine afternoon out. Some aggressively bulldozed tracks low on the western slopes are a detractor, but fortunately most of the ascent, especially if taken direct, leads through some great hill country. It was a day when the Cloud Appreciation Society came to mind since the clouds were bizarre and beautiful in equal measure.
Couple of weeks later the big snows enabled a ski ascent of Ben Gulabin at 2641ft or 806m it is a lesser hill than Ben Tirran, but none the less rufty tufty. Full snow conditions, an impenetrable mountain fog and intense cold made for a difficult ascent - enlivened by a fall through a cornice. Yes, I kid-you-not. A steep sided gully had submerged completely into the boundless grey-white expanse of this white continuum. Skiing uphill adjacent this gully, I was blissfully unaware of its hidden depths. Couldn’t even see it. Suddenly I noticed that my left ski was in mid-air, and before brain could rationalise this anomaly, the cornice beneath me had collapsed and I tumbled into the gully - whump - into the soft snow. Very lucky.

A torn knee ligament my reward for this minor stupidity but it wasn’t felt until later – and certainly not until well after the summit and a superb, though somewhat blind, ski down to Spittal of Glenshee. 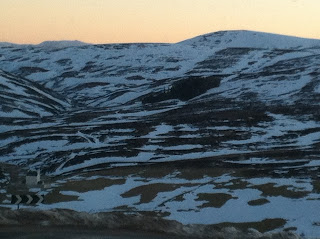 Into March, Six nations, Scotland winning against Italy and the rather unprepossessing Brown Cow Hill 2721ft or 829m. It gave Ewan Clark (and Ella) and I an excellent ski ascent and descent. Setting off beside Corgarff Castle, the ability to link patches of snow together along with a honed experience of where snow clings and lingers best after particular weather patterns helped a satisfactory slide up to clearing , summit. Don’t be deceived at the first cairn – the more distant one is 4m higher. A good decision for a short day out and exactly the right height to get the clear views between cloud layers. The ski out was a fantastic, exhilarating ride all the way to the road – and to the Allargue Hotel in time to see Scotland beat Ireland. Great Fun. 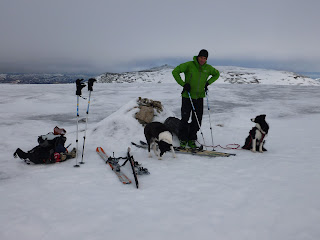 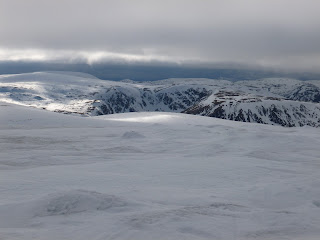 Time for a bigger hill – the White Mounth with Graham Dudley (and Sam & Khola). From the old Brig o Dee at Invercauld it is a 5km and steep walk up through the Ballochbuie. The hard old snow lies trapped in the track and lets us don skis and head up more effectively. But still a long slog to the col between Carn an t-Sagairt Mor and its lesser neighbour Ccarn an t-Sagairt Beag. Downhill swoops to the top of the Allt an Dubh Loch before the 300mtr skin up Carn a’ Choire Bhaideach. But the best was yet to come. The wedeling ski descent down the incipient coire that is the Allt a Choire Dhuibh was just magnificent.